The surrealist bestiary is not an old tome trying to account for the fauna of a lost continent.

If animals and especially certain animals are common in surrealism yet surrealists rarely want to make a big issue of this fact, this is because we hope to make other use of them. Some types of animals have assumed poetic associations from several surrealists and become part of a tradition of surrealist animals. Sometimes we describe such selected animals as “totems”, often when they represent a creative, spiritual or emblematic focus for the individual, or a sign of shared affinity among comrades. But on the collective level, they may start acquiring a “mythological” sense, being part of a life-world of hopes, values and fantasies shared between those who collaborate in the particular spirit, but also spanning over geography and history to those who work, have worked or will work within the same framework under other circumstances. And it is in the sense of real, active mythology in the hands of a movement that I am using the world “bestiary”. A shared imagery is a diffuse and largely objective or unconscious part of such a mythology, which nevertheless keeps being mobilised in minor struggles and perhaps also in major ones.

The major point with a surrealist bestiary is the extent to which it is and promises to be a force in the arsenal of ”miraculous weapons”, as Césaire said, and he was already at the time referring, no doubt, to something that emphatically included his own fiery invocations of close and exotic animals as living imaginative defiers of racist western civilisation and all obstacles to the exploration of the unknown and to the freedom of the imagination. Why would anyone want to be human anyway? There might be reasons. It's just a sad and lonely position, unless you know where to look for accomplices. Or you don't know at all, and therefore might start finding them.

A compendium that addresses the preliminary conditions for such a bestiary and collects element in an obsessed yet unbelievably sober taxonomy is now available through the bonegarden page or directly here.

Posted by the biographed poet at 10:27 AM 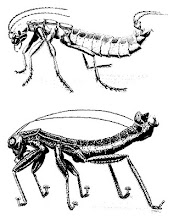